Land work is situated between Heaven (the first thought) and the Beyond. Here, we have to labour and love, confront our shortcomings, go back to square one with an elemental fairness and sanity. After that we learn the art of unconditional expression, that we are One with everything else – total immersion, the unknown, the unexpected and unintended, the Void.

The End was commissioned by GIPCA to be performed at the Hot Water Festival, inviting artistic commentary on climate change.

At the time I was on a 3 year long exploration of living on land, my response to what was becoming clear that we needed to adjust our ways in order to meet radical changes in oil production and climate change.

At the time of this invitation I was living on a farm near Wolseley, Hoekiesdam run by Aletta Venter, a bio-dynamic practitioner and strong proponent of ecological consciousness in education and living practice. 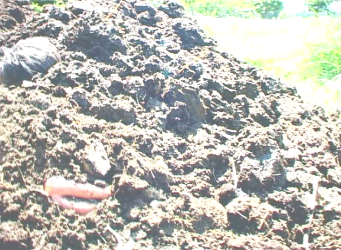 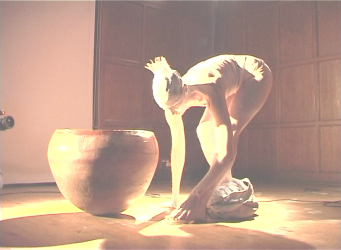 My main role on the farm was to create compost. The main and ideal ingredients of fertile compost is cow dung, green grass, dry plant material and soil, constructed in layers and watered lightly as the heap is being built. The form is also important. The shape of a bread loaf with minimum requirements, it has a meter’s depth wherever one would penetrate the heap – the ideal form. Windrows can be built when one has lots of ingredients, forming an elongated loaf as long as you wish. The ideal height is 2 meters high. The compost needs to be covered with net or grass and rested for a 2-week period. Then it needs to be turned with hayforks---literally topple it over onto a new heap next to the old ones. After another 2 weeks it needs to be turned over again, rested for 2 weeks and then one can begin to sift the compost, stack into bags for a bed somewhere. 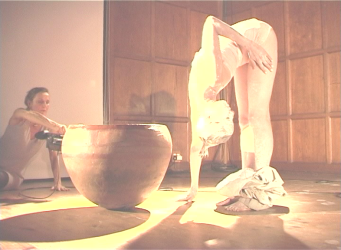 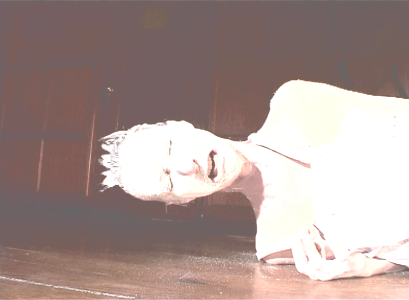 Why compost? It satisfies my compulsion for the basics. Without good soil we will have no home. Composting is acknowledging that our soils have been eroded, changed in structure by fertilizers and of course pollution.

The performance of The End was a way to bring this practice into theatre performance. The work performed had three stations: a female civilian, a farm labourer, and becoming-earth. It was also represented in me wearing three costumes: a dress, dungarees, stripped of costume with white clay over my body. 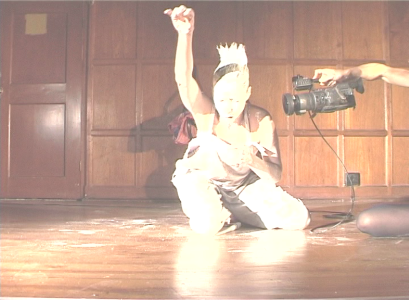 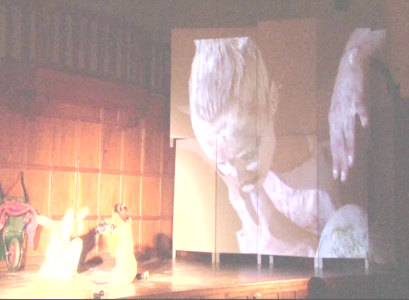 The set was constructed with large, staggered flats on one side of the stage. There was a wheelbarrow center stage and a large clay pot to the other side.

Two videographers Joelle Chesselet and Nicola Visser filmed the performance. Joelle was on stage with me, filming my movements. Nicola was off-stage filming Joelle and myself. At a mixing desk the two cameras were considered and a chosen image was projected ultra large onto the flats.

Sound was provided by a recording Joelle had made on Hoekiesdam, of night sounds, mainly frogs.

The narrative was very simple. A woman enters the stage, walking very slowly, as if sensing something beyond her comprehension. Then she notices the wheelbarrow and dungarees, slowly replaces the dress with dungarees and lifts the wheelbarrow, rolling it to be placed upright against the wall. For here she lowers herself onto the floor, allowing emotions in slow motion. Then she progresses to the clay pot, removes her dungarees and very slowly takes herself into the clay pot after wiping brown clay over her forehead. All lighting is extinguished except for a candle inside the pot. When she lowers herself into the pot the candlelight is extinguished. 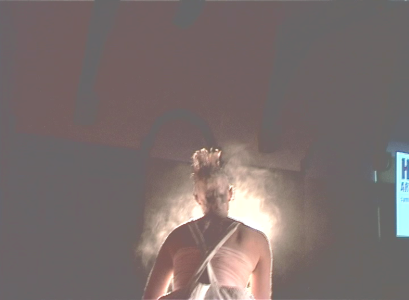 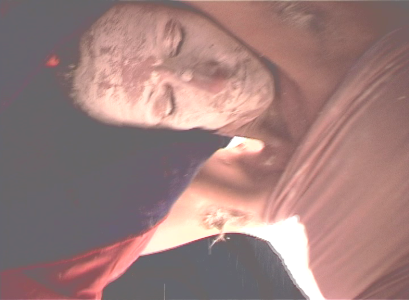