An extraordinary collaboration of dance, voice and revelation.

In this production I worked with a remarkable poet and singer Jacques Coetzee. Our major resource as a team was the pooling of movement, voice/sound, the story of our time inside the sacred vessel of ability and so-called disability. Jacques has been blind for most of his life. He is a person for whom this factor has become a deepened source of creativity and in INTIEM ETC a source that also deepened his ability to sense what needs to be done, feel how much, where, when and explore the nature of the world on the edge of crisis, as performance.

It was a work that was strongly based on relationship, the variations of intimacy, and the crisis in the meaning of intimacy. But the relationship was also that with the planet, we later called it the planet of performance. And thus our exploration delved into the nature of sounds and movement, from the soul of nature which gradually wove the whole performance together.

Somewhere during the rehearsal I received an email with the following message in it. In the Pacific Ocean, off the coast of Japan a mass of human waste has formed consisting of plastic and other debris churned into a centripetal motion, a plastic island the size of Texas. On currents flowing around, under and through the mass this everlasting churning might be the sea’s way of purging herself of the results of pollution. Multitudes of animals live but hardly survive in this state of plastic for long, their movements dictated by the conditions within which they have been born.

Tossie van Tonder, the writer of Intiem etc performed with Jacques Coetzee, is a veteran performance artist who also holds a masters degree in Psychology. Her thesis focused on movement as therapy which may explain how her latest show moves her audience into exploring a small world of fragile moments and emotions.

The small world van Tonder and Coetzee inhabit is demarcated on stage by means of a circle formed with ropes – the kind used for mooring sea craft.

Coetzee, a blind man who is hard of hearing, establishes the parameters of the world he lives in by means of feeling his way around with his feet. Slowly.

Nothing in Intiem etc happens fast. Slowly van Tonder breaks free of ropes coiled around her. She enters this circular world and that is where the interaction between the two performers begins. Or maybe not. They might have been connected long before they were aware of one another.

In their small world they take on different “personas” – mainly by means of the sounds they make. On each exhalation while van Tonder is uncoiling herself, Coetzee (wearing the jacket of a naval officer) makes the reassuring sounds of a mooring vessel – bringing her into the safety of a harbour. Coetzee is known as a singer in his own right. With no visible effort, van Tonder produces high pitched seagull-like sounds. It becomes immaterial whether they are human or animal or a form of plant life for that matter; they share a common soul.

With her face painted a powdery white (Japanese Butoh comes to mind immediately), van Tonder takes on the role of the traditional healer, trying to make sense of the world the performers inhabit. But the audience is not excluded. The projection of water towards the end of the performance spills over the audience – including them into the flotsam and jetsam of living.

The therapeutic element in Intiem etc lies in the intimacy of togetherness. You don’t necessarily have to see things clearly; you don’t need to understand everything completely. Sensing the moment – with co-inhabitants – might be all that is needed.

This image stayed with us and began to inform the work. And because of the open-ended crisis elucidated by this story, the performance of INTIEM ETC was by necessity a work in process. It became a comment on the human being and the world, the entangled feelings between the two and the rising Movement, a (political) resistance so to speak, against and for the survival of this relationship. The heightened purpose in the continuity of this work was to admit to an extraordinary sensibility with ourselves and others while in relationship with our environment. 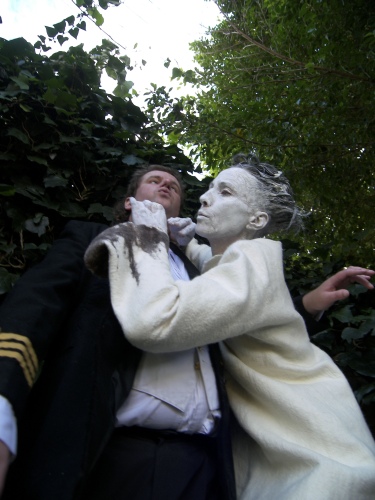 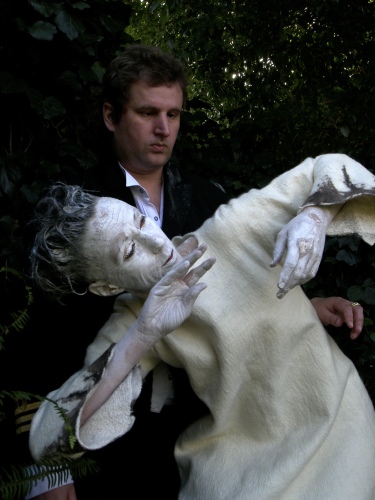 The rehearsals drew us into critical questions and we found creative solutions to other questions not yet asked but nestling in the body no doubt. The work in sound, listening, relating, the animal soul within ourselves never ceased to inform us of the renewed conscience of the human being as a result of its human doing. Can we tell what our circumstances ask of us? Where in the ecological drama do we belong? What precisely are our powers, really? It felt as if the new inquisition into which we are on the planet had no other outlet than embodying this sub-terranian existence of humble transposition into the nature of nature.

Jacques was costumed in a sea captain’s dilapidated uniform, like a survivor of the sea, with a swiveling Victorian piano chair as found object. Textile designer Karen Suskin made my costume of sheep wool. Here is the background to her choice of material: Felt is intertwined in legend, an ancient textile made by man with its origin in nomadic culture. I am fascinated by its ancient and modern magic, its amorphous quality and limitless possibilities. The reference used for Tossie’s garment is derived from the relationship that felt has with the human body, a symbol of life and warmth. The inclusion of an animal earthliness and heaviness, to an ethereal human lightness, vulnerability and fragility is what attracts me to this work. This theme of ‘body’ and second skin has been pursued as a fine boundary between ourselves and our environment, one that is under continuous threat. Felt has a very definite effect on anyone looking at it and even stronger for those who touch it. It is a visual, kinaesthetic, emotional experience, as is this performance.

At a glance, myself in this woolen dress with the rest of my body in white kaolin was a representation of the animal soul next to Jacques, as man. Around us, in a circle, which provided a safe demarkation of space for Jacques’ movement, was washed up rope intertwined with plastic.

As artistic vehicle, performance around a loosely structured time, place and plan, gave INTIEM ETC the ability to grow on the performers. For that to happen the intention was to welcome, but await the invitation from the planet of performance until the senses gave the go-ahead to enter. The six senses? Yes, but more. The sense of life, the sense of breath, the sense of movement, the sense of voice, relationship, dance---the sense that planetary performance breaks us through a resistance, into the sense that, humbled, we are more. Our being more is the invitation. Participation in the vastness of everything is the sign of our time. We found that the mythical dimension of the human experience in this work could be entered through an embodiment of our innate intuitions. This was a route to the essence of things---or perhaps of ourselves. Intimacy with the self in this context was the last site of resistance before, what felt like a collective and conscious Movement, could begin. In a way one could say that this was how we moved to begin the Movement.

In our rehearsals and with each performance the work developed further and further away from the word, down a staircase, so to speak into the subterranean world where man and animal shared a soul. We wished to remain as raw to impulses as possible, true to our sense of the moment, present, allowing for whatever intuition and expression to guide us into the next. And increasingly we felt that we could never return. 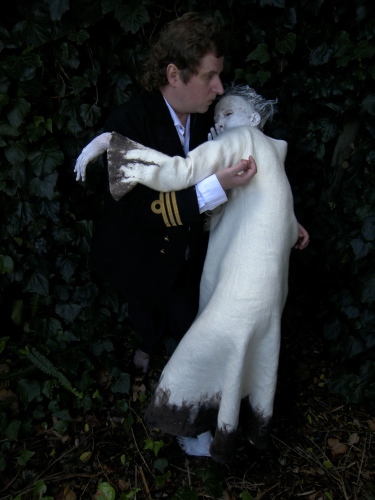 Therefore, this work was new and different each time it was being performed. By analogy it could resemble a healer throwing the bones : the bones’ constellation, as they fall, depict another segment of the drama every time they fall. This staying with the crisis of the plastic island, its autonomy, its unique life forces, ailments and desires, intimate with its own ecological immanence, we, as people, could not avoid facing humankind’s ultimate position on the edge of crisis, and this we wished to perform for people.

For us, the senses exploded. We became sensitised to what we freely and regularly began to call ‘the planet of performance’. Every rehearsal turned into an ecological drama that supported the release of and from the actual matter that matters, namely the body. More than getting to know death, death came to know us. No movement was to be known to the performers, no voice was to have slid over the voice chords before. Essence was in the making, was the making.

INTIEM ETC embodied the entangled relationship between human beings and the world, as if these two were fixed, final, total, but in flux. It also enacted the rising Movement, an artistic resistance so to speak, for and against the survival of this relationship, heightening the extraordinary sensibility innate in human beings, the natural environment and all things as they unfold. Again as such, INTIEM ETC had always to be a work in process.

The name INTIEM was simply a continuation of Afrikaans names for my works and the most essential term for what the experience was meant to bring : intimacy with the self as last site of resistance…before succumbing to….(and here, whatever each person’s notion, fantasy of) “the end.” The latter was expressed in ETC. But “et cetera” also expressed the uncomfortable albeit abandoning attempt to include all of femininity. It posed a condition of complexity which could not be reduced to a simple list of adjectives in defining the female body’s ecology. It was a sign of powerlessness and at the same time the unlimited process of signification itself---the excess which necessarily accompanied any attempt to define identity once and for all---one body inevitably defining multiformed bodies.

More than a performance, INTIEM ETC was the desire to bring conscience as close as possible to the body until the aesthetics of such an effort revealed itself---a devotion rooted in an awed and reverent gratitude, lucid and grounded. But INTIEM ETC was also about intimacy as care. The crisis of care as ever more acute yet ever more private : intimacy with other people’s needs, fears, dying, power, waste---the most profound of social divides. Intimacy as the last resistance is intimacy with the self under critical circumstances, in crisis, in death. This was a remarkable opportunity to investigate the vastness of this existence, as artists. 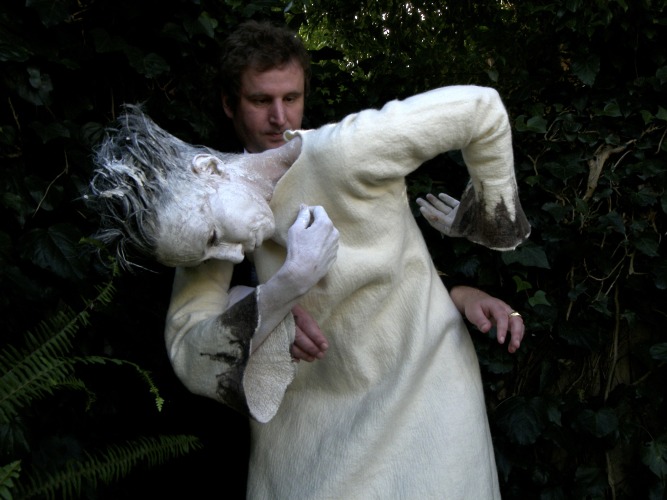 I HAVE PREPARED FOR WINTER

I have prepared for winter,
Have learned the ache
Of things diminished:
Architecture of bare places
And things denuded, pruned
Almost into nothing.

What then is this
Voluptuous and lush
Trembling of the seven senses
Into ... delight,
Into this startling sorrow,
This terrible and inappropriate
Fire?