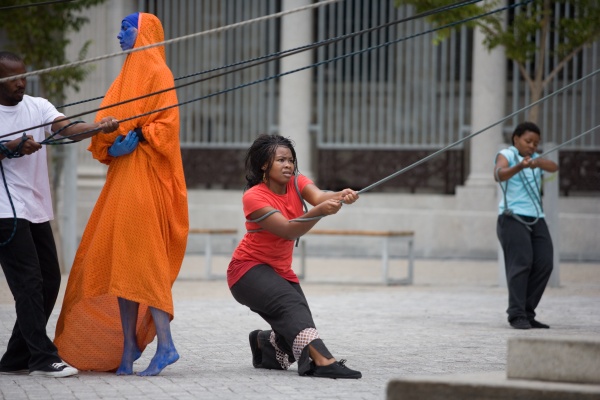 This website would give a pretty accurate picture of what Brett Bailey, the curator of the 2009 festival had in mind.

Works in the Programme at Infecting the City Festival

Twelve established performance makers from South Africa, neighbouring states and Europe have been divided into three teams. In residency in Cape Town for five weeks, each of these teams will make a large scale, outdoor, site-specific work that investigates the issues around ‘Home Affairs’. With reference to the recent xenophobia outrage, the work of these exciting creatives will draw on the history of our city, the shadows that haunt our urban landscape, the complexities around immigrants and other ‘outsiders’ on the fringes of our society.

This aspect of ITC aims to foster a culture of vibrant street art in our city and, by bringing together diverse artists from different parts of the region and the world, to forge a creative network, to inject new skills and approaches into the city and to send these out into the region.

My involvement was with a work called LIMBO. A French choreographer was given about 10 performers, all black, to create a work on Church Square. I was called in for a reason I was not clear and had to make sense of as rehearsals progressed. I ended up being told by the choreographer that what I should concentrate on is to do whatever I wanted while the rest of the performers were given the task of dismantling colonialism. This took place amongst other acts as tying ropes around the statue of Jan Hendrik Hofmeyr, a stalwart of Die Afrikaanse Taalbeweging of the previous century.

I ended up designing my own costume made as a Somalian female in a burka with my revealing skin painted in blue. Nobody commented on this. I just continued concentrating on what I sensed was required. For the record the images are by photographers Nicky Newman and Saun Wilson. 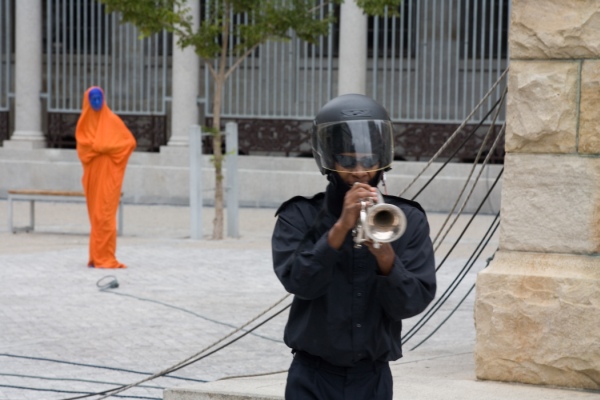 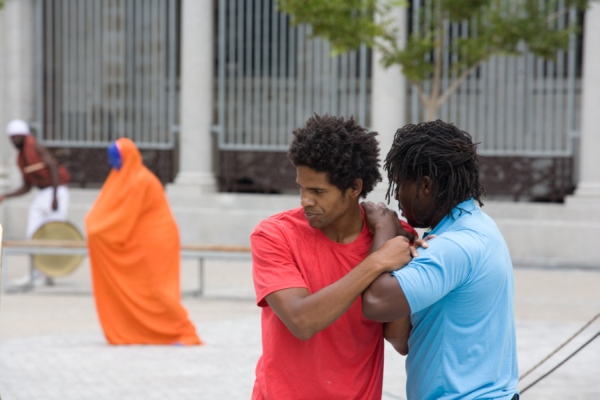 Now we enter the territory of ‘singularity and irony,’ in the phrase of my colleague Chas Unwin. Jan H Hofmeyr was a SA politician during the 19th century who fought for the use of Afrikaans in the country under British rule that declared Afrikaans a non-language that should be abolished in every public space. While the majority of white people were Afrikaners this was to become a law against which every Afrikaner was fighting. Language, religion, culture, survival was all interwoven reinforcements giving meaning to white existence in Africa.

It is ironical that Afrikaans is still under threat in public domains such as universities. Yet there is an upsurge of Afrikaans cultural production in the platteland and the cities not to speak of the innovations on Radio Sonder Grense.

The battle with English dominating local languages rapidly affecting children’s ability to learn is not a recent phenomenon. It is a major obstacle in our current educational curricula. The festival allocation and the rare instruction I was given to do what I saw fit, gave me the space to meditate this span of history. Uncannily while the other performers were battling with ropes to pull down the revolutionary, I adorned his features. He could well have been an ancestor of my matric Afrikaans teacher who was a liberal in the platteland, outspokenly anti-State in 1972, in our classroom and one for whom I was to give whatever it took to pass well. 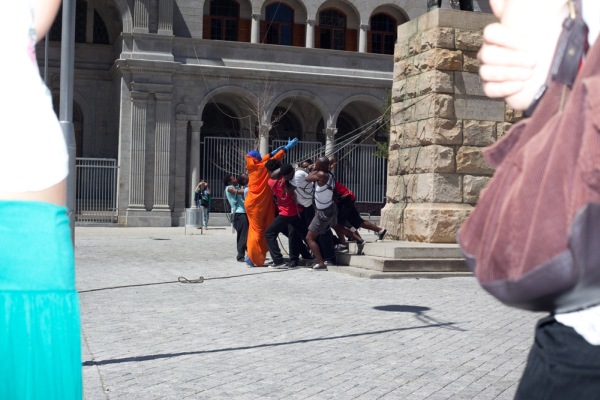 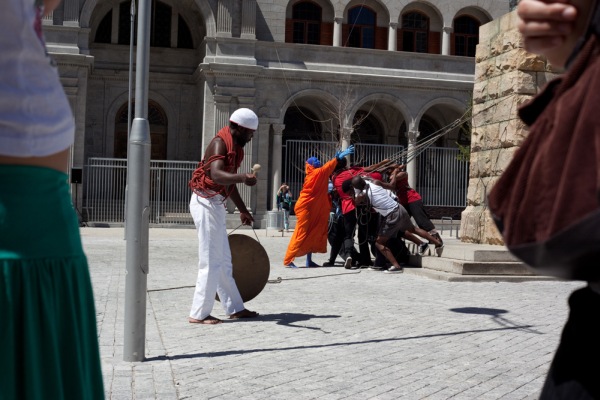