In 2006 I was invited to participate in the OUT THE BOX FESTIVAL FOR PUPPETRY. I found myself out on a limb. I was not a puppeteer and yet the directors thought that my work would be welcome.

What was a live performer doing at a puppet festival? The idea of strings or manipulation of puppets became the challenge for a live display of the principles supposedly present in the world of puppetry.

There was a piano on stage. All the boards (revealing the strings) were removed so that it stood as a skeleton of potential. There was a stool onto which I could sit. The piano was an additional object that portrayed the performable and audible elements of the event. The piano was not necessarily meant to have been been played. The object was utilised in an ‘unpianoic’ way---at times an object of catharsis.

There was also the presence of a group of people who entered, crossed and exited the stage from the first two rows of the audience. 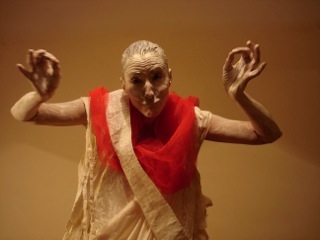 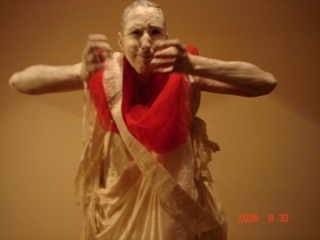 Back to the idea of ‘performance as puppetry.’ On the one hand, this was an improvised performance not directly controlled by a puppeteer or manipulator. On the other hand, though, the presence of the spectators in this case spilled over onto the stage and intensified the performer’s awareness of being witnessed, affected by their presence (stringed). Over the course of an hour twenty men, women and children (in that grouped order) individually walked over the stage with their own personal chair (brought from home), put it against the back wall and looked at me while I was performing on the stage. Each person could sit there for as long as he or she wanted and then take the chair and walk back across the stage. It was a dreamlike entry and exit of figures only looking at my performance. Their eyes, and presence emulated ‘strings.’

The ‘strings’ as in puppetry, released and tightened to create story on the body of the puppet were replaced by the witnessing of participants who one could say were accomplices to the story. They were creative receivers of the improvised story taking in what the performer did, deciding when to be a witness and when to abandon that role, ‘stringlike.’ The witnessing could be seen as either manipulation, or a freeing of the performer.

As an interactive act between live people, within an unknown territory, POPPE brings a number of questions to the fore.

What does it mean to be witnessed and to witness in the theatrical context of a performance without a script or formal choreography? What are the reciprocal influences at play between spectators and performer?  What elements are there of puppet and puppeteer? How much of a hold do the witnesses have on the performer’s freedom to explore authentic expression? How far can/may she go? When does a witness abandon their position as witness? And, who is moving whom? 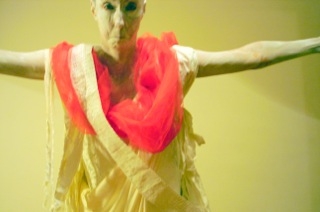 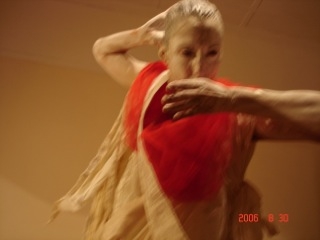 A witness gives the gift of an open space – (possibly) theatre. It can harbour the beginnings of our sense of self up to the chaos of our strongest feelings, which amongst many possibilities could become a prayer. This is a shared space of theatre, thousands of years old, which we can once again renew as a place of explorative ritual for our time, when necessary and appropriate rituals have disintegrated and decayed.

Whatever happens, the gift is mutual: the performer performs and the witnesses witness. No strings attached. Laat die poppe dans.
(Program notes)

But it is important to note that it was in preparation for POPPE that I came across the Ph D dissertation of Ashraf Jamal called The Predicaments of Art in South Africa. There was a time during rehearsals when I considered to title this work, this performance “Jamal se Kweer.” For Jamal ‘queer’ “is not reducible to identities defined by given sexual contracts. Rather, it is a way of thinking that appeals to an élan of mind and a mode of social and cultural engagement that is in every sense without bounds.”

In my scheme the idea of extreme witnessing would provide for extreme expression. As Jamal attempted, I sounded this gesture (of the extreme) out in the general state of art in South Africa.

In South Africa the extreme nature of an embrace might as well be to run naked through the streets with one’s arms open. The ambivalence of running to or from comes to mind. Stationing myself in the idea of an act, in extreme witnessed mode, out of bounds, virile with possibility (2010!) and terrorized (trellidor-style) showed up our double (and multiple) lives banging on the door of management. For Homi Bhabha, a prominent Africanist (in Jamal)  ‘it is a radical perversity, not sage political wisdom, that drives the intriguing will to knowledge of postcolonial discourse.’

For Jamal “being outside and beyond oneself, not only to undo a controlling sage wisdom but, more significantly, also returns us to the unthinkable, the strange, or radically other which cross-sects and shapes so much of current thinking.” This calls for “a culture of exaggeration in a state of emergency.”

Jamal offered me an intellectual frame of dance that would bracket ‘the beginnings of my self up till the chaos of my strongest feelings’, a phrase I was drawn to work with during rehearsals and performances.

It was then that the possibility of witnesses was an important factor in this work. In South Africa one does your utmost not to go to ruins and rot alone on stage. Not in South Africa. Witnesses are vital, they were a kind of buffer that would provide an agreeable platform for an extreme state of emergency and ecstacy as legitimate ambiguity. I was to express the resistance to and rejection of “the role of the conceptual, rational, systematic, structural, normative, progressive, liberatory and revolutionary … the social change,” “because for the creative artist in South Africa life is too fantastic to be outstripped by the imagination.” (Jamal)

With this it felt that I directly confronted the critique on my work from the 1980’s which stipulated me (autobiographically) as other. At the time it was a confusing and painful position to be in. In POPPE, the presence of others directed as witnesses, my ‘othered act’ was embraced. Inside of that self-imposed boundary I could flagellate through and around an open space whatever was to emerge.

Yet with the door open, there was no exit. I stood on the threshold of an unfree world. The dances and voice productions appeared to be alert and at the same time unconscious, driven and defeatist, prophesising and archaic – a sense of surveillance and blindness. In his writing Jamal also marked that this is why “a sense of hopelessness and fatality has, with a stealthy rapidity, consumed the imaginations of many South Africans.”

But still, Jamal went a step further and referred to Bhabha who has called ‘the estranging sense of the relocation of the home and the world – the unhomeliness – that is the condition of extra-territorial and cross-cultural initiations.’ And, ‘the unhomely moment relates the traumatic ambivalences of a personal, psychic history to the wider disjunctions of political existence.’ For Bhabha 'unhomeliness' is enabling: ‘it galvanises awareness, transmutes solipsism and pain, sensitises one to the wreckage of global displacement, forges a restless and revisionary energy that turns an incredulous terror in the face of a nameless present into an expanded and ex-centric site of experience empowerment.’

As a last note, let me add an odd incidence. After the run at The Intimate Theatre, UCT a visiting German couple contacted me to give me a report of their experience of my performance. They did an esoteric practice of releasing souls. I have no experience of this practice. They informed me that when they entered the theatre there were about 50 souls hanging in the air around the stage. During the course of the performance and with certain cathartic moments, apparently, some souls literally vanished, being ‘released.’

If this was at all a metaphysical reality, I could relate to it on the following grounds. The ‘weight’, the ‘burden’ of performance is experienced as a ‘pregnant state,’ one that relieves itself as the performance continues. Therefore my propensity to engage in theatrical improvisation is a preferred mode above a preconceived and strictly structured work.

Whether this has direct relevance to the world of souls, I cannot tell with certainty.