I spent the year 1979-80 in the USA studying dance and dance therapy with various teachers in New York, Baltimore, Santa Barbara and Los Angeles. It was an experience I still have a strong visceral memory of. After that year I returned to SA and joined up to perform with a group called EQUINOX for a year. 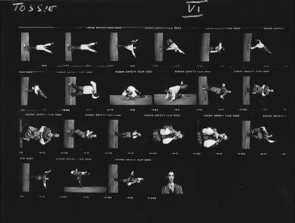 After being inspired by what America offered me, I felt that everything was moving too slowly for me. I needed to get ahead of myself. I left EQUINOX after a year and headed off on my own.

I started to make dances in the studio and worked with inspiring ideas such as computer mathematics with an architect friend called Andries Botha who designed a mathematical graphic on the first Apple Computer of that time. The design was a configuration that built upon itself ad infinitum, filling the screen and “beyond.” The computer was set up to be in the foyer of the Roodepoort Stadsteater where I would have my first one-woman show. On the stage a similar design to what emerged on the computer screen was taped out in white on the black ballet mats. At the end of the dance, as part of its ending, I ripped the design off from its peripheries to the centre. The sentient moment of holding all patterning, order, fractions, dimensions in my arms, as much as the void of ‘hanging’ in space with no ratio to define my spaciality, and dressed in while on the black mat, was the exact opposite of the art of ‘letting be’ (German: Gelassenheit). It infused me with an ‘inherence’ of responsibility, for the next order. And so, with this ‘order’ removed, the stage was clear for the next dances. The Baroque music was that of Telemann. (This dance is not on the DVD as the film degenerated too much for digitization to be successful.)

The second dance was to stories told by Karl Trigaardt, a South African actor with a distinctive very bass voice. These were Nepalese stories from a book that I had found in that country a year or so before. His voice was deep and slow to give me good time for my choreography to fill out the meanings of each story.

The third dance was a scene having tea with an imaginary other; the artistic tea leaves were being read and it spells disaster, an immediate consequence was a tragic dance ending in death…There was no music or voice, no real cups, no tea, but sure as spells go, a disaster. Unfortunately this dance was not saved by time and there is no recollection, however some images were saved.

The fourth dance was called In Die Voorkamer. This was an enjoyable piece of fun with a local-cranking record player with LPs of various American singers. The setting was still very private, with the idea that ‘this girl’ was doing her own dances for an imaginary audience. She used the mirror to regularly check what she looked like, danced on the riempiesbank and wakis, and was slightly paranoid that someone would suddenly come into the room. I realized how much humour there was to be displayed within the gamut of my history. Ironically this kind of scene accompanied me often when I was dancing alone, or working in the studio on a solo performance. Who has seen me, who is looking? Was it a desire to have more witnesses to the process of making these dances, something I always regretted not having, simply because the process of making a dance is a fascinating one – often a disturbing depth as a radical consequence of inner freedom.

This KABEDAZ, ‘come and dance’, was then the first one-woman show, of which many people assured me it was the first ever in South Africa, which I could not believe, and was suspicious of in a country such as South Africa where cultures, such much as performers, in rare sceneries, passed each other like ships in the night. It was only at the birth of Kabedaz 2 that I decided that it was to be called Kadedaz 1. The name? Try to say “kom en dans” closing you nose. It all makes sense when you wish to remain a mystery….