There is always a favourite. The temptation to list and therefore to have an item on the top of the list is deeply ingrained in our human nature. Timeless Tango is my favourite dance on this archive. With a statement like that, one does not get away for long. So, here.

I could relate to Laurens van der Post at a time when the Jungians began to frequent SA and friends overnight began calling themselves Jungians.

Van der Post’s character reminded me of my maternal grandfather Willem Hendriks, tall, silent, troubled, dedicated, driven like Harry Dean Stanton in the film Paris, Texas. Van der Post wrote about the things I wanted to know at the time. He spoke of the interior and exterior of men, of Africa, his Bushmen friends, and of the unbroken line between the earth and us. 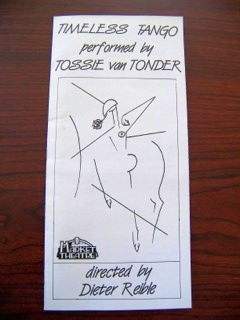 I began to move mythological animals. I explored how I had to leave time behind to make them come alive. Ai was not going to make any animal recognisable as we would in a children’s play. No, I wanted to capture the soul of every animal. The antelope was frozen in time, uncomfortably long for an audience, I admit. But being shot drop dead, one needs to sustain life in its sculpturesque beauty, to feel the pain. This was a time when I learned how to fall straight down in a second.

The whale was and endless breath in and out with the highest pitched sound in the back of my throat while I drifted in and out of the ocean. And so forth.

The aim was to find an image that would unify man and animal to depict man as soulful and a conscient being. That happened right at the end but also in flashes during the performance.

The work was also about shifting between the hunter (with the staff) the hunted, the hunt itself and where all merged as one. The violence of the hunt, the final piercing of the weapon through the animal’s neck and then, in the same act becoming a victim myself, all in one act, was one of those moments of extreme satisfaction artistically but also psychologically. Astor Piazzolo’s music, which had just crept through the cultural boycott, was ideal for this hunt. And it was the only music I used, 3 minutes or so, that was enough.

Athol Fugard, whom I had never met, wrote me an extremely complimentary letter which is in the documents of this archive.

At the time I came to hear of a dance festival in Switzerland that I was going to venture into. I made contact with the orgnisers and after some exchanges I was gearing up to take my work further than the SA borders, Europe to be precise.

By now I have made good friends with Richard Beynon and his wife (whose name I will remember) who offered to assist me in making this trip happen. They fundraised and managed to get Swiss Air to fund my trip there and back.

I arrived with a VHS of the work which I showed to the festival. They wanted me to return the next day for them to have a meeting about my participation. I took the next day on walks and rides to enjoy the scenery. When I returned I was told that the work would be most welcome. But since I was a white South African it would not be in their policy to allow me to participate. They suggested I go back to SA and approach the Market Theatre to allow me to bring my work with a group of black performers. That way they would have no problems accommodating me.

Back home, I went to the office of Mannie Manim who was heading the Market Theatre at the time. He had a most curious office with walls at angles that made no sense. And it was tiny. Mannie listened to me and responded that my work was not political enough for them to associate it with their work at the time and therefore could not take my work on tour with the Market Theatre.

During 2013 I relayed this story to Mannie during a break working on my show’s lighting at the time. We smiled at the times we lived in.

It was not this latter saga that keeps me endeared to Timeless Tango. It is the work itself. The embodiment, artistically and psychologically of a conflict and its resolution, the finer nuances of both, the breath of the on within the other, the acknowledgement of the beauty of complexity, this is what makes me love Timeless Tango above all my other works.