To become a parent, life puts a task before you in no uncertain terms. It might be a child or a group of people who are directly in your care. You must look out for them. They are in your soul-care. But when someone is really close to you, you are in each other’s soul-care. A child may even take up this task for a parent.

In mamakaluyolo I felt that this being, my son, was playing such a vital role in the shaping and destiny of my life that it had to be explored in movement. For a while I explored this by myself, and then I decided – against a keen ethos that some material does not cross the line between mother and child – that I could invite Luyolo onto the floor with me. This was a great collaboration of eager examination into what our relationship was all about as connected within the boundaries of movement and voice. 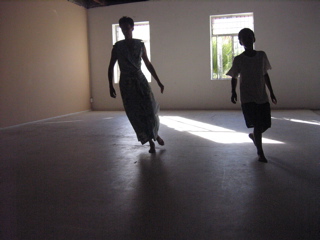 I called on Caroline Calburn, a friend in the theatre world to accompany us on this journey.

As a ten year old, my son had a mature ability to take direction from Caroline, an actress and theatre director. Choreographically and also by improvisation he had to feel what would speak to him and then to make the choice to respond to it. Over time the icons of his presence in this work, the milestones marked by dance and duet became an unspoken agreement of our collaboration as artists on the altar of the parent and the child.

Caroline suggested the music of Wim Mertens After Virtue. On her birthday, many years later, (in 2013) she admitted to me that this music had a particular history for her. At the death of Marlene Blom, her close friend and very talented dancer and choreographer of the 1980’s, a parcel of all Wim Mertens’ works arrived. This, after the long search for more of his works by Marlene and Caroline, at a time of the cultural boicot against SA and of course, the lack of the internet to source music easily.

This was the structure of the performance: The spiral of eight dances to the eight pieces of music began to explore the mother-child relationship. It began pre-conceptually, pre-birth, aware of a presence in waiting ‘to come down.’ Then it moved into the uterus, then birth, toddler, the exchange of soul-care more conscious now, and then a celebration of our relationship. Without any of these stages being spelled out to Luyolo, and the incredible care with which the improvisation and choreography were directed, the spiral curled out into a form of individuation.

The venue was on the top floor, an open loft space on Buitenkant Street opposite the city police station. My friend and fellow performance artist Wilhelm Hahn helped to design the space. He collected vinyl floor strips (made in China) from a township and laid out the floor with these. There was also a very homely oval mirror against the wall which reflected our dance for any position in the room. 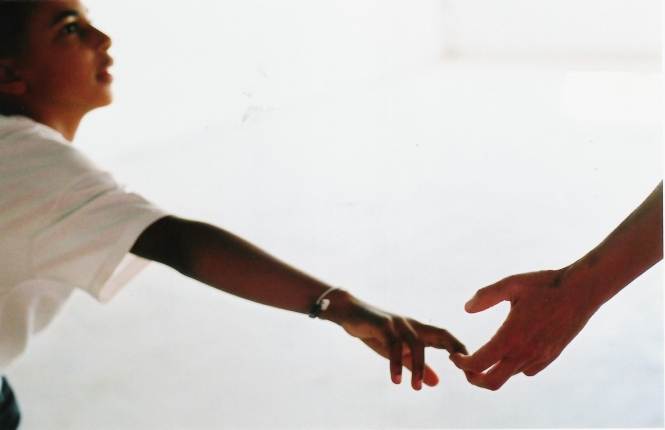 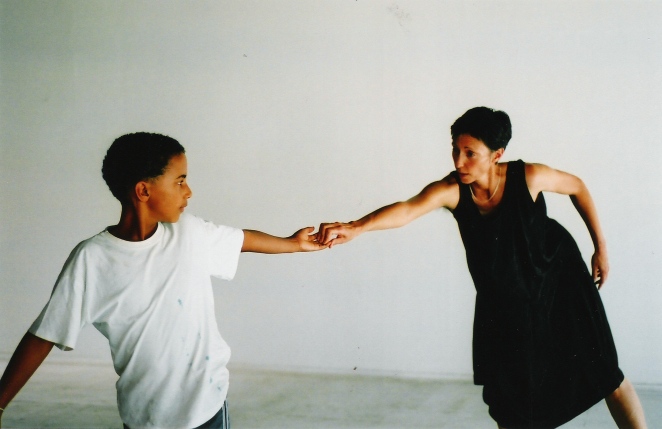 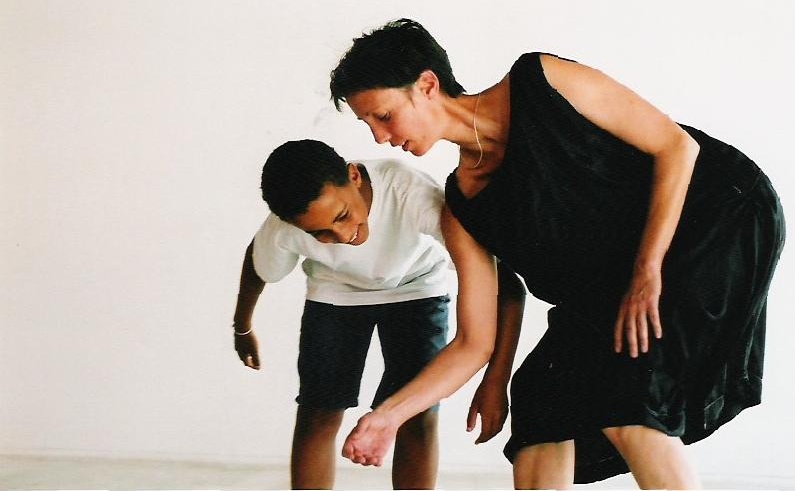 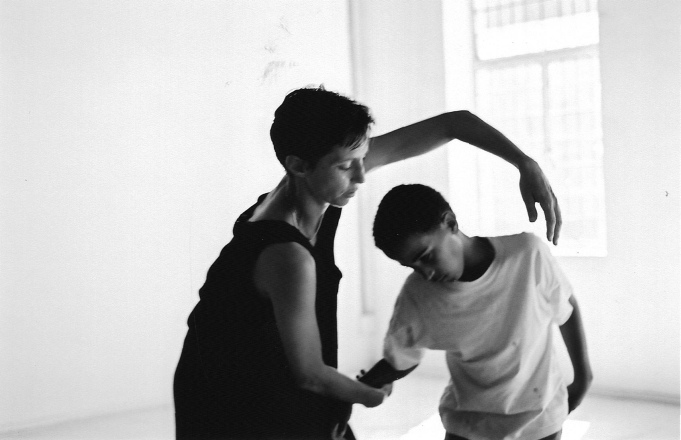 Every performance felt like a series of prayers. The whole event had to be managed as if a ritual. Each evening some friends of Luyolo managed the door, asked people to remove their shoes, guided them along a trail of candles up a staircase, entering an oval of chairs, and indicated when all may sit down and therefore, that the show could begin. Two boys sat at the head of the oval and it is from this opening that they managed to lead the spectators out again.

Parents, teachers and children came and felt the immensity of this work and the inportance of celebrating one’s children through artistic tasks. Together we developed a heart of kinship and affinity, an authentic and substantial position in the community.

mamakaluyolo was a prayer. It naturally manifested as a clearance of the ritual space, warm-up, gathering forces towards a goal in which we both shared the responsibility, and held the space equally powerfully. The fact that Luyolo could contain within himself the care of this work and the celebration in a public domain of our relationship and everything it embraced, showed me what creative soul-care could become as part of community, creativity, ritual and ceremony. 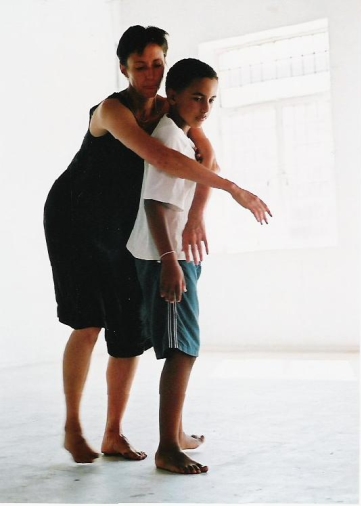 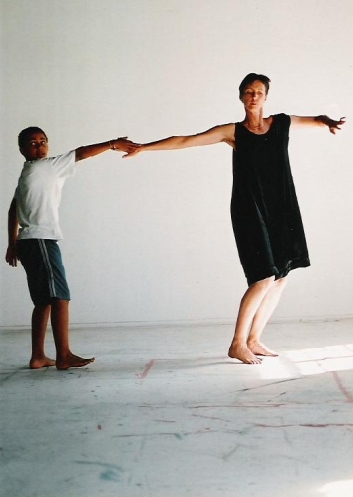 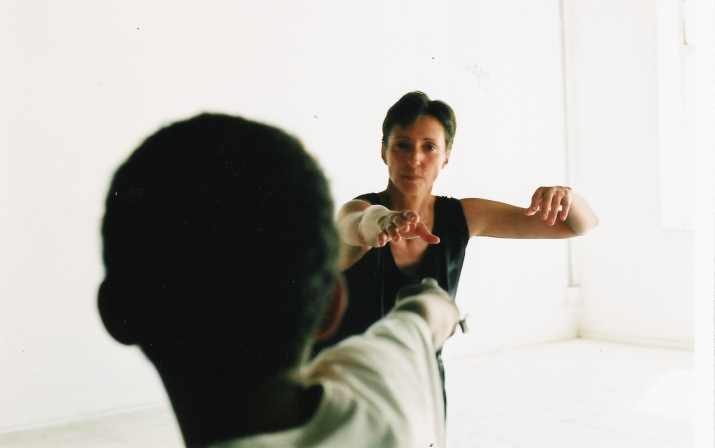 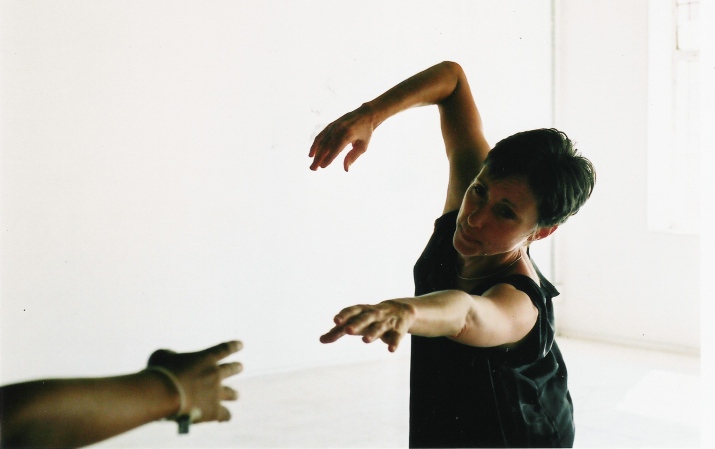 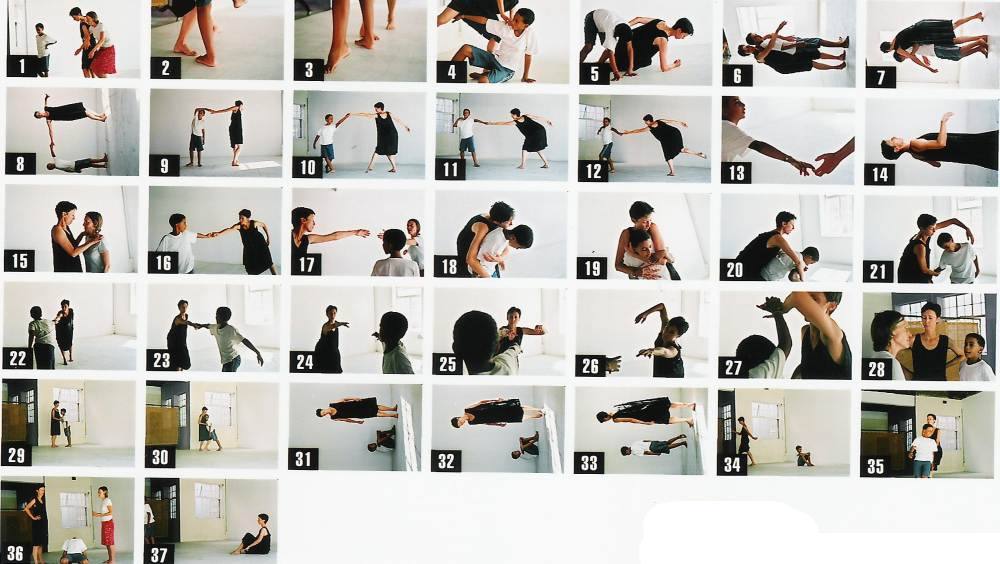