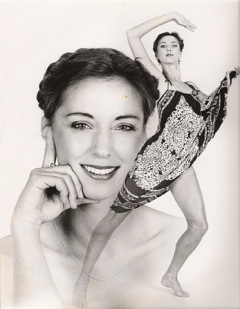 In 1983 I followed KABEDAZ (1982) up with KABEDAZ 2 in Johannesburg. Those were the times when the same feature movie came around again, such as Rocky, followed by Rocky2, and it solved the problem of having to give a title to a performance with many dances in them, each with a different message.

Of course the origin of the work KABEDAZ was still ‘Come and Dance’, following the Afrikaans song Kom en dans, Klaradyn! I could see how I could continue to call every performance of mine by that name as it posed a possibility that spectators would be attracted by me as the dancer rather than by a ‘fictional’ title. But, alas, this was the last of the series.

The idea of the dances would each still be a private affair that happened to be taking place publicly followed in KABEDAZ’s (1982) footsteps. The performance felt like it could have been viewed, voyeuristically, by the audience. The set was designed to be a backstage dressing room, only with one dressing table from where I would costume myself and readjust my hair for the various dances. Then entering the space (the stage) as if it was an imagined public space, each dance began with its music.

The first dance was to the songs of Frank Sinatra. It was romantic and charming. I wanted to swing and the idea of Marilyn Monroe in her heels, and the like, was very appealing. My dress had to lift regularly. It was the romance of American movies from the 1950’s, the music of unadulterated adoration between men and women, and the sensuality of joui de vivre.

The second dance I called Ratrace, another dance of angst, a theme I gravitated to often in rehearsals. It was to the music of Meredith Monk whom I trained with in New York. Her voice was inspiring and it opened up voice work in performance for me. It was a totally novel idea to dance to a woman’s voice on the verge of breakdown, and breaking down sure enough. I loved the collapse, the groping for life, submission to a larger force, choreographically admitting that I do not have what it takes…yet a dancer can portray death, and die off the reason for that dance, over and over again.

The third dance was to a recording of frog sounds. I taped the frogs with a New Yorker who came to visit, Neelon Crawford, (a photographer who was interested, at that time to photograph Nelson Mandela, a thought I immediately dismissed). This dance was improvised and it was my entry into theatre performance by entering the unknown through improvisation with movement and my live voice over the frog sounds, a length of 20 minutes.

The last dance was a fulfillment of my old wish to dance to music of Elvis Presley. I had my own record player on stage, onto which I placed an LP of Presley. Again I danced for the mirror often, then fried a hamburger patty on stage to the sound of the tracks, with lots of tomato sauce, got dressed in pedestrian clothes and walked off stage. The last act (dressing for real) was accompanied by a reading of the news against the Pink Floyd’s music of The Wall (1982). My friend, Lochner de Kock read ‘the news’, ‘die nuus’ but of course what he read was forbidden. So he read it, like a traditional newsreader, except that every word was turned back to front. It was an eerie and familiar sound, to the rhythm of ‘news’, but not understandable, unless you dissected it. With this I walked off the stage and out of the theatre, leaving the audience behind.

Unknown to me, or less known, this performance spanned the romance of utopia to an existential angst, which was to become a regular trademark, depicting the sub-territory of a South African psyche during the 1980’s, then some Dionysian exploration of the unknown of creativity, ending with the lurking sexuality of a Presley offering a springboard for an escape from the real news.