In 1984 I took a trip with fellow dancer Gill Scott and artist Johan van Zyl along the West Coast in Johan’s new VW Golf. These cars had just arrived on the market and we landed up on hilltops and riverbeds with this car, and discovered people from Namakwaland, ‘lost to civilization’, literally an eye-opener. Of course the reason was that no-one drove where we did. Lekkersing was a community of people who still wore clothes from the previous century and we met a man who lived with his kettle in a riverbed. 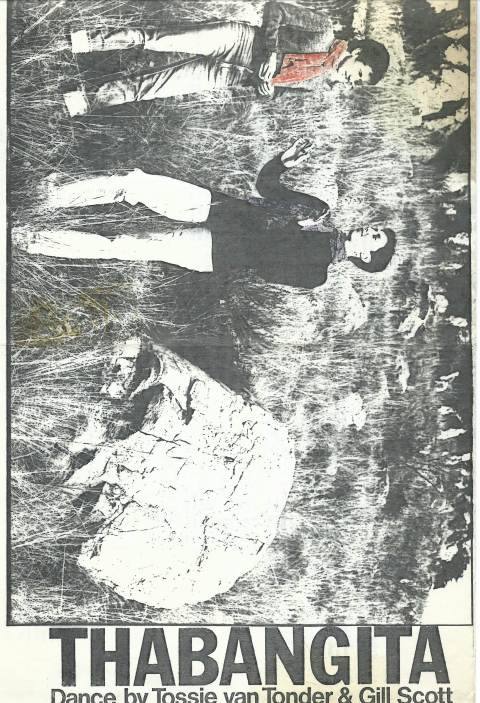 It was here where Gill and I were inspired to do the mountain dances, Thabangita. It was a series of four dances, some solos and some duets. We approached ADIDAS to sponsor our performances in Grahamstown and at the theatre of the Johannesburg College of Education. They were willing to give us gear, too much to creatively cope with, but no money. Money was not allowed in the arts, we were told. It was not a sport. End of story. So we created a work incessantly taking gear off and putting others on to traditional, indigenous music from the Transkei. That was the last dance on the program.

Our first performance was at the second anniversary of The National Arts Festival in Grahamstown in 1984. I remember Gill made the most delicious cheese and pineapple sandwiches, to feed us on the way there. It was a winter full of warmth. The school hall was packed with eager spectators. The video says it all.

The first of the dances, called Kalahari was to the music of Dollar Brand. The inspiration was Bushmen, drought, nomadic life, and eternity of spirit.

Where were you when I needed you yesterday was based on the Fibonacci series of numbers which shows up in growth spirals in nature. Mathematics is Gill’s forte. She would always prepare our training with diverse exercises inspired by mathematical formulas. What fortune I had to be exposed to this way of thinking about dance.

META(K)OSMOS(E) follows me ever since I did this performance. I am drawn to the movement of the unfolding being. Here from a single cellular existence to humankind, and its demise, leaving the earthly existence. Ecological thought, without becoming apocalyptic, but rather an undoing, even an unthinking to a beingness of sub-aesthetic level, a place that is not pretty, informed me then as I had a keen interest in the evolution of the earth. It was the time before global warming, but certainly an event I was aware of already.

1984. Here are Gill’s words: “This piece noted that we were dancing in 1984, after anticipating George Orwell’s 1984. It was about frantic rushing about; about sitting, waiting and watching, and finding balance, and revisiting images from childhood dreams.”

Motherhood is another theme that I have always been attracted to. The mystery, the volume of its significance in a person’s life, the universality of its power, motherhood here is also a personal narrative, a desire to have my own child, one day.

Here follows an extract from the title, published as Nobonke, She of All People in 2012 and later, 2014, as My African Heart. It is the voice of the spirit child to its mother, part of a dialogue between this child and the mother in me.

When my mother sings with my maternal tongue she follows the cadence of her full, white darkness. Untying the binding precision she plummets the credo of the African requiem, repetitive and bass and not in a square rhythm that keeps us all safe, on two feet. She excels in instability, falls over, her head too heavy to hold up onto her thin neck and the spirits too unwieldy to please no matter what she endeavours as sum of her abyssal lot. Blind with her face exerting any mask of darkness, hollowed eyes and protruding teeth, one colour, there come sounds that have never been sung, or extorted under duress. Woman alone she makes those notes contort against each other into an unthinkable lament of which she sustains the continuum. It is only fear that can withstand fear itself in this face of defiance. I have witnessed this and it has made me strong. Outside, with the wheel of smiles an era comes to an end.

I look with fondness at the poster that Johan designed for us. Thabangita was also the first multimedia performance that we had done. Johan projected an image of a cave via an overhead projector onto the back screen at JCE and as the dance proceeded in front of it. He then drew in a design of cave dwellings that reminded one of the Ficksburg caves. By the end of KALAHARI the design was complete and the residue, accompanied by the fading piano notes of Dollar Brand, was evident in the very complimentary responses we had had from our loyal audience of 1984.