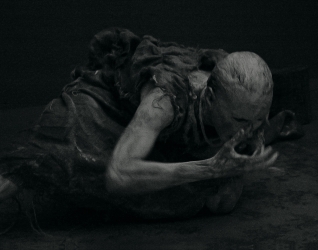 The English or Afrikaans for Lwandle is Strand.

It is a place, a South African township barely a kilometer from the ocean, False Bay, Cape Town.

South Africa felt like it was slamming down and building a city a day. Politics was becoming very complex, tight, illuminating, perplexing, dangerous, healing. Students protested fees, libraries were burnt down (I mention this amongst many incidents as it touched me the deepest on this section of the news), the president was suspected of getting rid of the Finance Minister. The latter is seen by most as the saviour of SA, off the list of downgraded countries. I went to a play reading of young dramatists with a plot depicting the new leader in her hubristic plan to execute the young white woman as sacrifice for all blood already let in the colonial project. This would be taking place at her first inauguration as leader, before the people. As much as I invite and encourage artistic expression, I felt the anger as camouflaging so much more of our SA existence having become selective in what it wants to bear.

There is an unspeakable cry, unposturable stance, an impressible guilt to be had by White people for being the reason that everything is wrong, a fact that can not to be refuted. Might it be that I was traumatised by the politics of the 1980's and any impulse towards that same thud of impassable freedom from Whiteness would still be lodged in my body?

It is not imaginable for me to exist with some degree of mental stability and purpose with all these streams of embattlements through my being. I have to allow my body to give herself in... to the truth of this experience - as socio-aesthetic entity.

More, increasingly I experience the life of my performances as not able to be leveled by the spaces created for performance currently. I almost have to simply slide into a space, perform and leave soon thereafter, before it becomes known that I have indeed done work of revolt in that sacred ritual called the body. Or done the work, at all.

It must be said, but could it be said of me in my absence rather than by me? 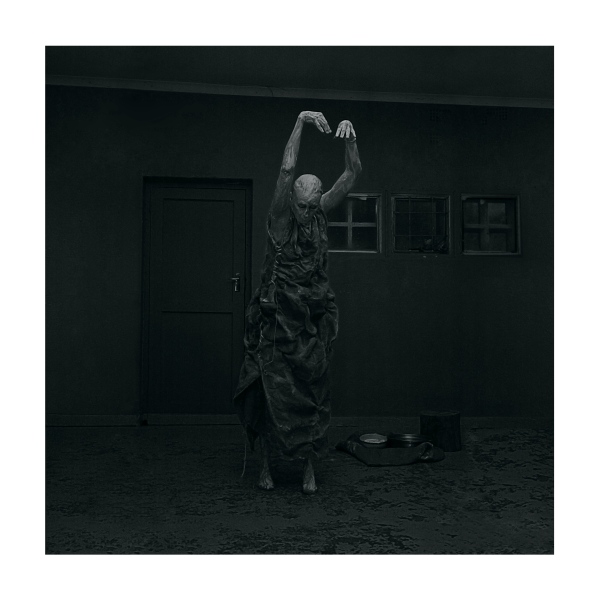 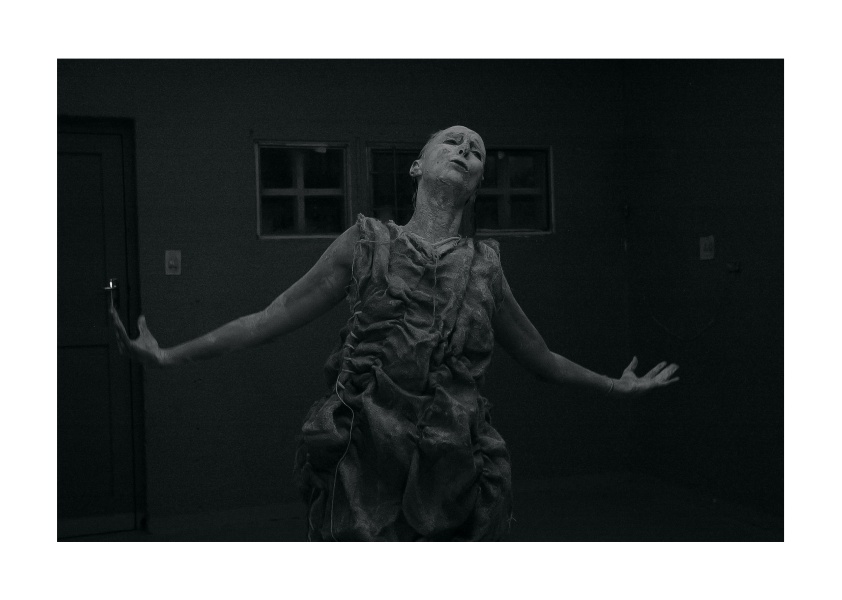 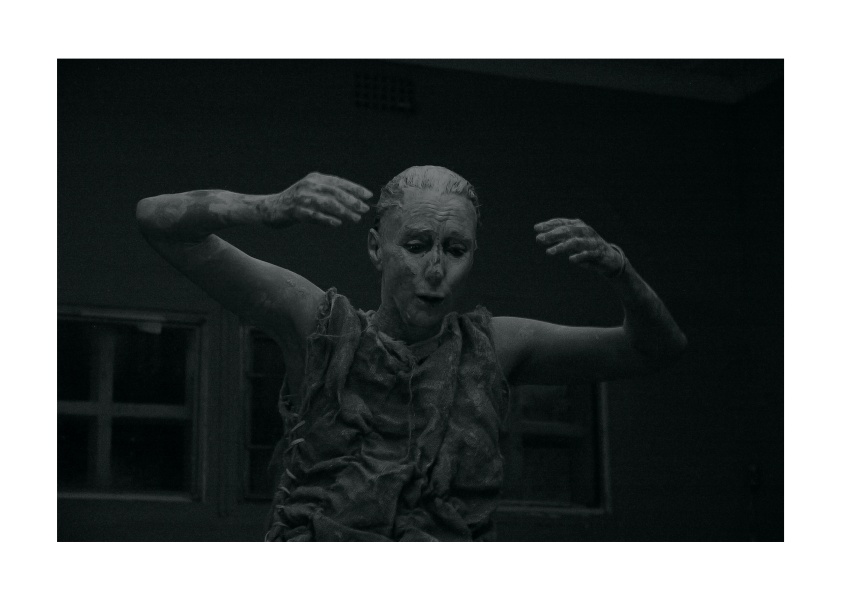 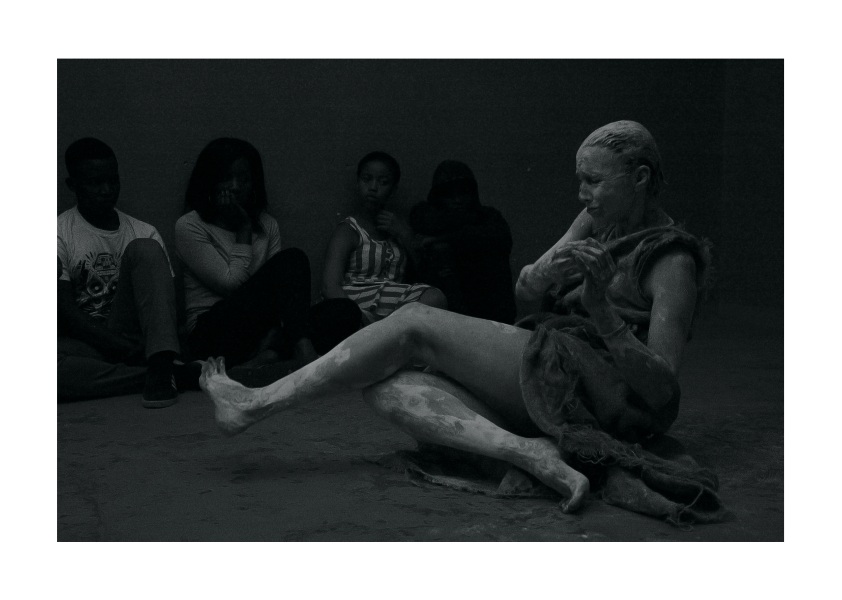 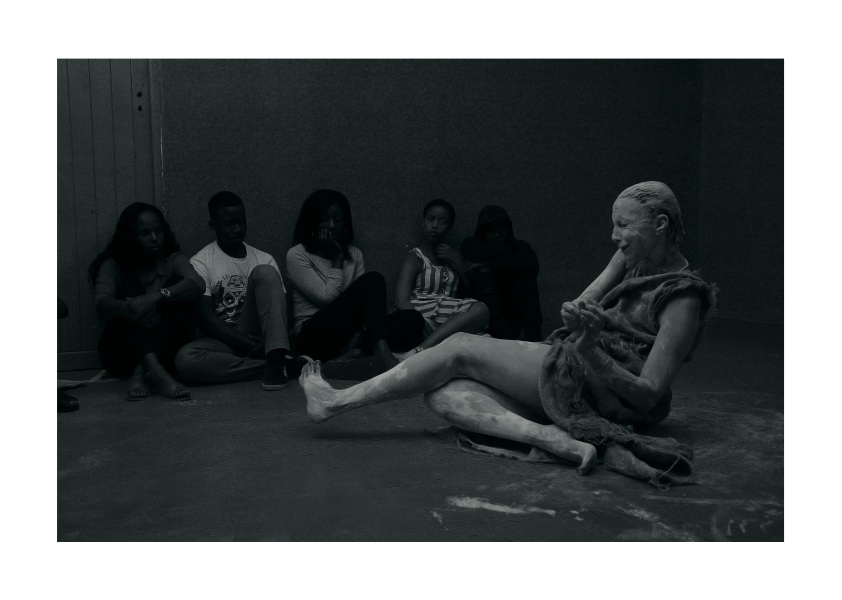 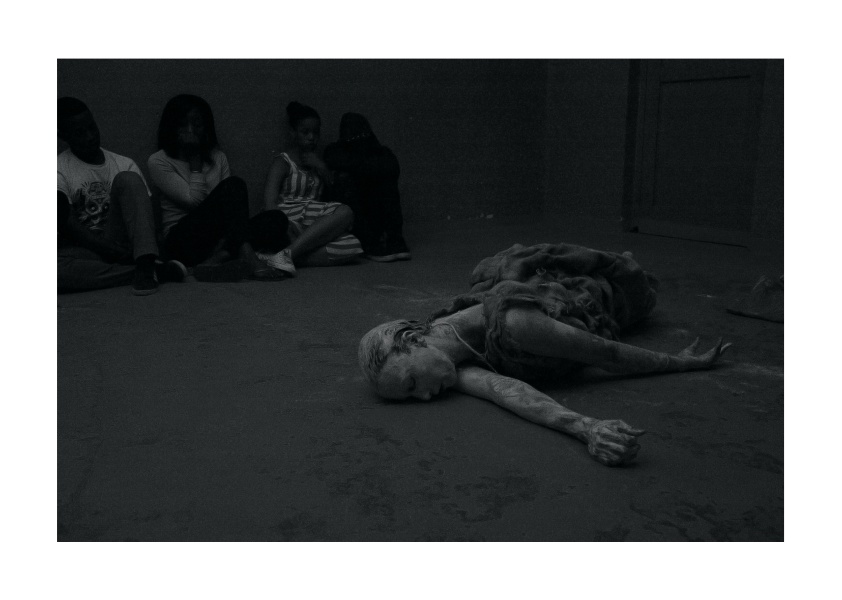 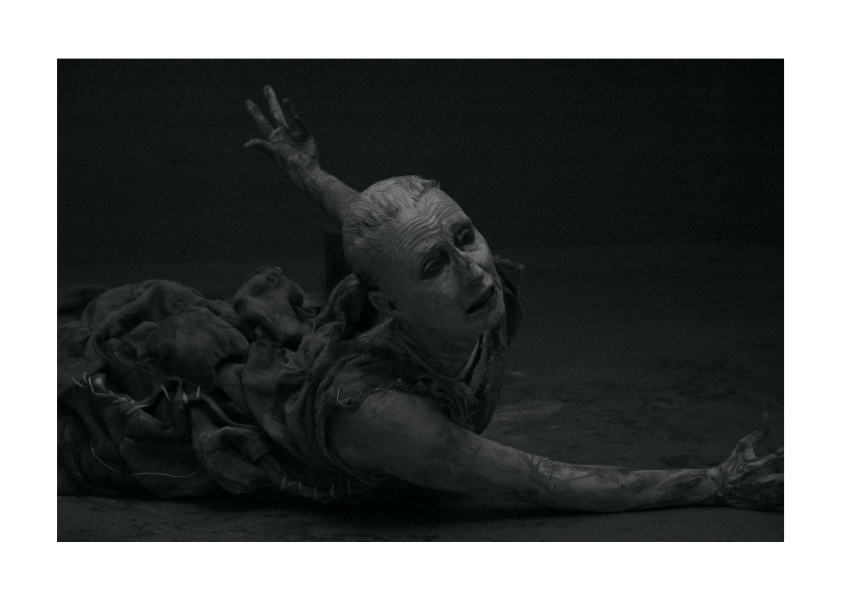 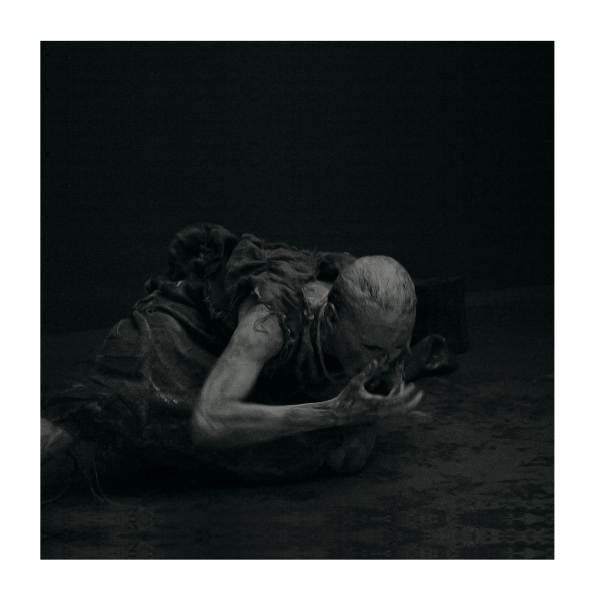 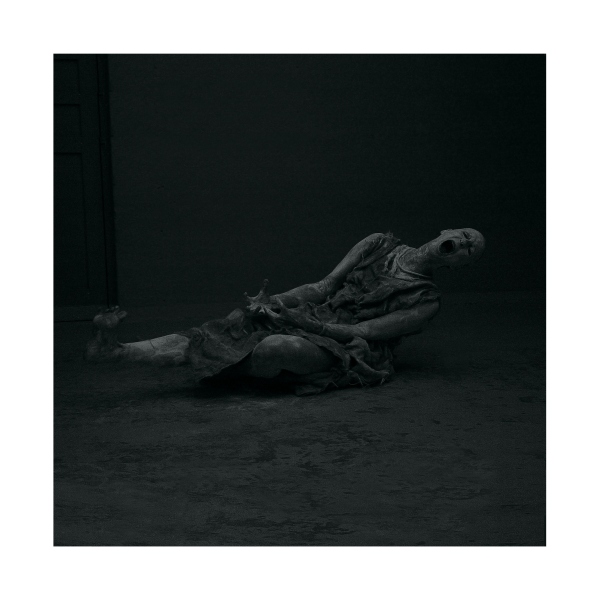 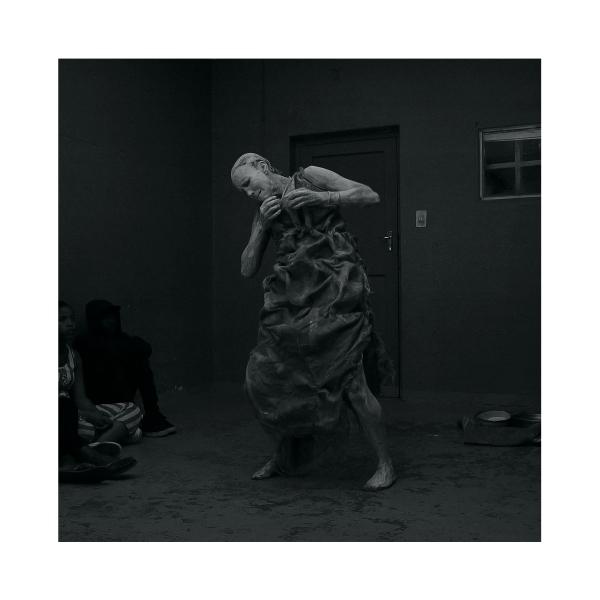 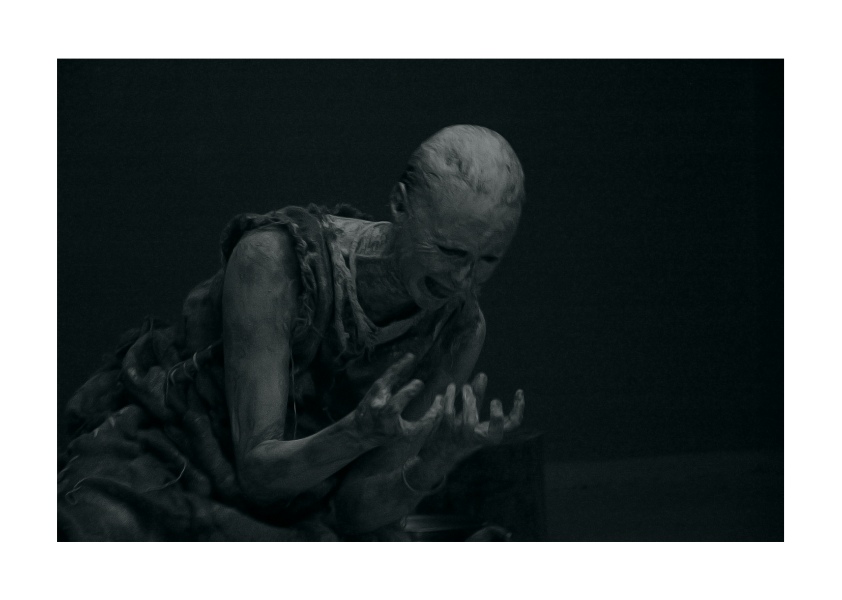 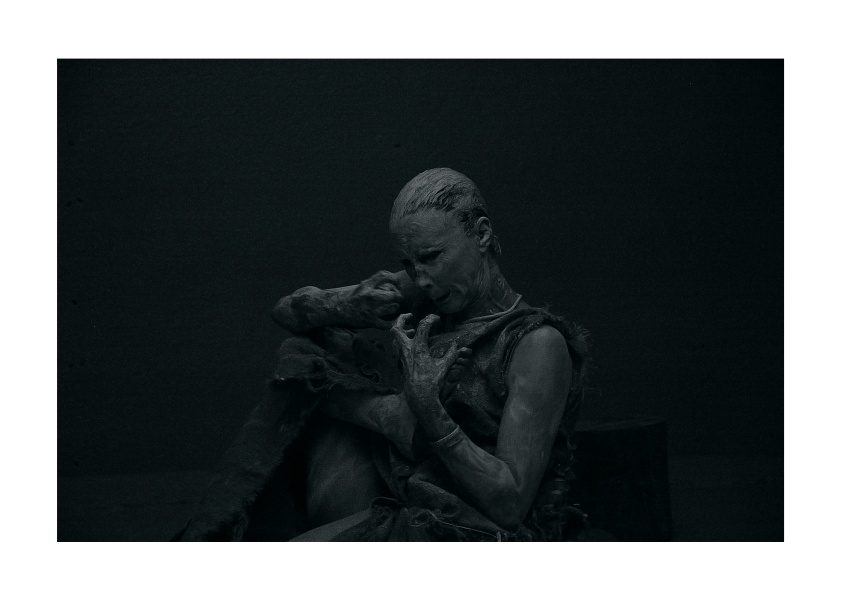 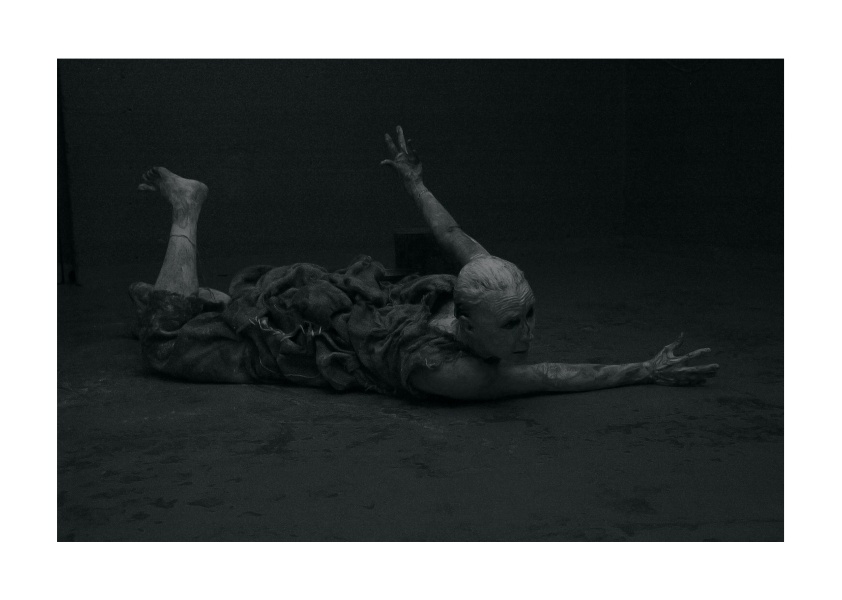 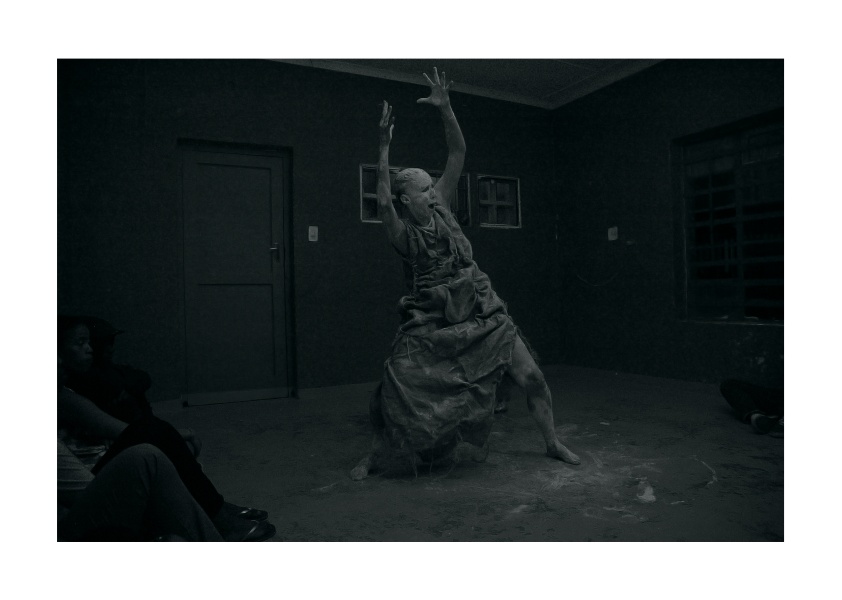 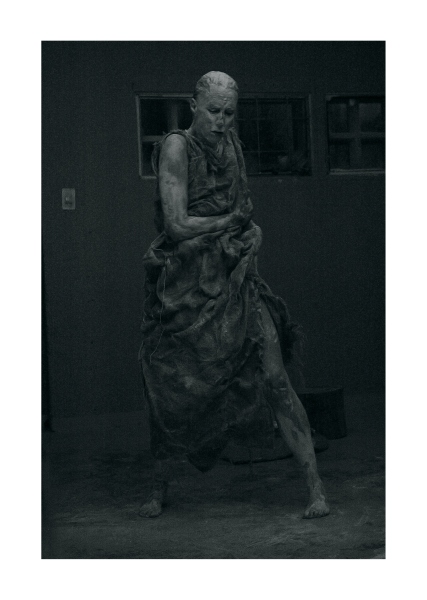 In my imagination for a costume I was inspired by the traditional herb traders of Macassar. They were standing on the side of the N2 hitch-hiking in their sack clothes and bare feet with bags and sacks all over their bodies, ashen skins against sack. It was a complete image, entirely of what they were willing to be in society. First I went to my friend Meraai to discuss the idea of a sack as costume. She asks immensely silent questions that I always feel should have been exasperated exclamations. On the street in Somerset West I met up with the herb traders where I had an opportunity to view their outfits from close. They bought coffee and rice sacks from a Woodstock shop and designed clothes from it. They appeared like short pants and jackets. Even waistcoats. With hems and seams, the lot. And knots for buttons. Days later I met with another friend Liesl at her mother Louna's place, where there was a sewing machine. Liesl began to pull threads from the sack fabric. We saw that pulling it diagonally would create 'peaks and valleys' which lend volume to the garment. We cut only one hole for my head. At home I painted the peaks white and the valleys were bleached with a brush. I pinned and tied the sides together with white string and my hands stopped at a precise moment when the last string was left hanging.

It was Sunday evening 25 September 2016 and the township was still in the full stream of Heritage Day celebrations, an event of the 24th, which is my father's birthday. Since I could figure it out, I always think that he was conceived on Christmas Day of 1925.

The people, the hosts involved were Mr Lundi Mama, Mandlenkosi Sixolo and Mandla's friends. They were all finely dressed young adults, with quiet gazes and little to say. They were willing to sit on the floor on flattened carton boxes.

My friend Charl Pienaar drove us, Guy De Lancey my photographer and Bethany Reivich an international student in shamanism/mysticism and performance into the township. People were washing clothes - soapsuds on the pavement - sweeping streets, children cutting across the road in swift motion, taxis were being washed. The sunset still felt open. At the dance/craft studio next to the gym, where we were not sure that we would have electricity, but was promised so because 'there is always power, nobody pays for,' we cleaned up, some, and began to move in. Some young children were hanging around making a noise. I asked them to leave the building. We set up some lights. Charl brought a flood-light and Mandla a ball-shaped garden light on a pole. The flood-light was tied to a broken chair, and the ball-shaped light on its pole lay on the floor. Jerry was the local videographer who turned up late. He was averse to bending low to get floor shots, but somehow excited to shoot something I differentiated from sport as being 'artistic.'

Close to an hour later the performance was over. Mandla stood up and made a speech. He vigorously encouraged people to take the freedom and give expression to themselves no matter what they do.

Young people brought their phones and each wanted to be photographed with me. The atmosphere, poses and gestures made me think of the pictures I saw in Bona Magazine from the 1950-60's. Posed but with extra style. Intimacy, with grace. Closeness with newfound worth.

I received WhatsApp messages with an endless string of attached images. It was given back the quickest way possible. Or, the images became an archive of an experience that was unusual, replicated in the ether. A body of evidence of a silent happening now leading me to the poem by César Vallejo:

For several days, I have felt an exuberant, political need
To love, to kiss affection on its two cheeks,
and I have felt from afar a demonstrative
desire, another desire to love, willingly or by force,
whoever hates me, whoever rips up his paper, a little boy,
a woman who cries for the man who was crying,
the king of wine, the slave of water,
whoever hid his wrath,
whoever sweats, whoever passes, whoever shakes his person in my soul.
And I want, therefore, to adjust
The braid of whoever talks to me; the hair of the soldier;
The light of the great one; the greatness of the little one.
I want to iron directly
a handkerchief for whoever is unable to cry
and, when I am sad, or happiness hurts me,
to mend the children and the geniuses.