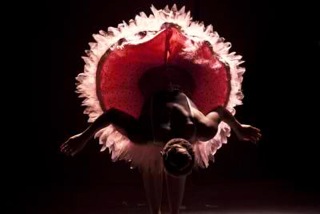 This is Mamela Nyamza’s version of how our meeting occurred for her.

With Dinah Eppel and Kirsty Ndawo I had a magnificent journey of crossing boundaries. That of South African traditions, dance forms, stories, bodies and ages.

It was a most magnificent collaboration that lasted for years.

This is a dance performance where the trials of being a black girl in the ballet class began, ending in traditional Xhosa celebrations albeit with a pinkest to tutu on the dancers’ bodies.

Mamela is a stalwart of dance theatre and has made the international stages appreciate and respect her as a South African artist working with the diverse intersections of race, gender, class, sexuality, motherhood and history.

The Meal is a work that has much potential to portray the vicissitudes of cultural crossings and Mamela being a daring performer, is a person who could take the meaning of work, its SA ironies and dramatic exuberance to profound lengths. This work is one of three I worked on with Mamela.

This is what she wrote regarding The Meal.

The first time, I saw Tossie I didn't know what to expect, having seen her in a dream like situation working with her, the following day I called her and she availed herself like it was in my dream but the moment we sat down and had a chat for the whole day I realised that I was speaking with someone who understands me as a dance artist, a woman and a mother. We spoke the whole day about the piece I was busy working on. The minute she walked into a rehearsal room, it was like my ancestors were agreeing with me, saying yes this is what you need right now as an artist in order to take a different direction in your path as an artist and to grow even further. She gave me guidance, support truth about myself now and how people see me now in the dance world.

I always come with many ideas when creating new work and I knew now I need someone who is going to minimise what I have and give it the real message that I want to give in the work. Tossie did exactly that within a short space of time. After that I realised that this is what I was missing in order to change and become the artist that I wanted to be in this century. She changed me and transformed me into a new thinker, creator and still guiding me to the right direction. I am so happy that I got the opportunity to work with her and grow in the process. I would recommend her to share what she had with others like myself, by doing that this country wants. We have the best artists as we have a lot to give but we need guidance in order to deliver the message.

Born in Gugulethu in Cape Town trained as a dancer at the ZAMA.

DANCE SCHOOL and later at the Pretoria Dance Technikon and received a National Diploma in Ballet also participated in works of eminent choreographers. In 1998 I received a scholarship to go and further my studies in dance at the ALVIN Ailey American Dance centre. On graduating I joined the State Theatre Dance Company, where I performed nationally and internationally. I performed as a dancer in major international musicals such as The Lion King, We Will Rock You & African Footprints. Simultaneously I have developed my own artistic practice, developing choreographies which deal with important political and societal issues of today’s South Africa.

Since 2006, I have dedicated my career to my own choreography. The autobiographical works HATCH, KUTHENI, HATCHED (recently got nominated for the best visual performance for Hatched at Out the Box Festival 2010, recently been performed in Dans L’ AFRIQUE DANCE in Mali and USA’s Bates Dance Festival 2011 and all of these works have been part of the Johannesburg’s Dance Umbrella) and new work SHIFT addressing issues of human rights, the status of women in sports. Recently performed my new solo ISINGQALA at The Bates Dance Festival and in Slovenia for the opening of the Gay & Lesbian Film festival in 2011. Part of the documentary film Goddesses by Sylvie Cachin. In 2012, directed a Hip Hop dance Theatre a first of its kind in SA.

Born and raised in KwaZulu Natal, Durban and began classical Ballet training at an early age. Further on in her training she had interest in Africa dance Contemporary at the Phenduka dance school and Flat Foot Dance Company. She matriculated in 2009 and moved to Cape Town 2010 and began her studies where she is currently a student majoring in Classical Ballet and Contemporary as a Major at the UCT Dance School.

Before a meal is eaten, preparation is necessary. It depends on the ingredients needed for the recipe. The amount of the ingredients and the temperature of the heat depend on the individual’s belief of self. The most basic division in the kind of preparation needed is between the creator and those who are being served.

A served person is brought into full satisfaction with the meal through acceptance of the combined- prepared, presented and satisfactory ingredients. But the process in which one becomes satisfied can take different forms.

Becoming the product is one of the most profound and un-profound joyous experiences for the diners who paid money for the satisfactory and unsatisfactory meal. This tract examines the joyful process by which one becomes the meal.../cannibalism.

The meal is the preparation of caring, abusing, game, power, hate and love relationship between the world of dance and the open mind of an African dancer.

The work will look at relationships between the two, where all are related to the field of dance, as someone who grew up under this elite dance world. The work will speak about generations amongst races, which means the art is mixing or rather has a real dialogue, new colours of the rainbow which is an expression of an open mind where choices speaks for themselves.

The work will also work in parallel, bringing colour while expressing art which is already prepared for most of us, going to a world where you have no clue how you going to survive and realized later it is for the elite, prepared by them, taught by them and we are open minded dancers trained in ballet bringing our culture into the field of dance.

We will be playing with what I have absorbed and dominated with excellence, eating and digesting it either good or bad. The core of the piece is exactly what happened in the art of dance, the meal that was prepared for me either sweet, sour, bitter and salty ... not knowing the taste, but it is what has become my daily bread as an artist and I am still eating, absorbing what is still left out there to digest.