The first Earth Day celebrations in Namibia were held on 1 April 1990. Imagine that Namibia’s independence from SA was barely 9 days old.

Like most of my work and performances in Namibia, there was mostly only one happening, one event, one day and it was over. It was as if anything took place within a larger context and the repetition of a performance would be seen as overindulgence, inappropriate and would be misunderstood. The venue was the Windhoek Art Gallery. There was an exhibition of Jackson Mbhazima Hlungwane in the gallery. He made the fantastically larger than life wooden sculptures out of the trunks of trees. One needs a hall for one sculpture to be truly appreciated. 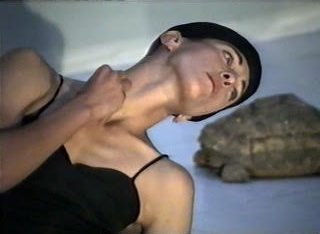 I was also aware of the beginnings of legislation on hunting certain species threatened with extinction. Independence brought new thought and perspectives into the national fold.

Nevertheless in my contact with certain officials I managed to get live tortoises to accompany my performance. These were placed amongst the shells of dead tortoises big and small. Everybody had a tortoise shell in the garden or on the stoep amongst the snakeskins and bones of the land. There was also a shell of a porpoise.

I used the music of Michael Vetter with overtone possibly in duet with Natascha Nikeprelevic. It created a haunting audio in a large space with Hlungwane’s spiritual monoliths and the dead and living reptiles around me.